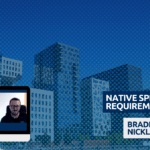 Brad: Obviously, one of the points before we start this, we were talking briefly, about the international developers and teams that you guys have, and this may be a bit controversial for the local markets, but do you feel removing the focus on language, as you developed into an international business, there’s going to be a point where if you set up in the U.K. and Norway, there will have to be a universal language. So it’s probably a bit more straightforward for you guys in that sense, but what I do find and specifically within Oslo, you have so many great companies and consultancies, but I get with the consultancies that you need the language in Norwegian or whatever the country that you may be in, the mother tongue, but what I find is that they lose out on so many different ways of thinking and different approaches because everyone does everything differently and you miss out on some really top talent, and then some top talent is literally shoehorned only within a small 10 percent or 20 percent of actual employment because they don’t have the required language, and don’t get me wrong, I know why consultancies need it from the public sector and things like that, but it’s just crazy to see how rigid that still is even today.

Nicolas: And I could not agree more so myself, personally, I’m from Denmark, where there is a little bit of that mentality as well as sort of the Danish values. And, you know, if you live in Denmark, you should start learning to speak the language and this kind of stuff, and jobs, even though they might not be working only within the Danish market, they’ll require Danish, this kind of stuff, and personally, myself, I’ve always taken the international route. So I did all my studies in sort of the international courses that we had and so on and because, for me, that’s absolutely the future. I mean, this whole bordered work environment where we only exist within the country and we only go for the customers that speak the native language or whatever it might be, I think that’s going away, and so I think our focus on our international people and sort of the common language being English in the company in this kind of stuff, it came very naturally, the founders, when foreign founding Pexip were international themselves, so from that, it’s supernatural, and then as we’ve grown, we’ve just come to realize that the more and again I go back to sort of the melting pot metaphor here, is like the more different perspectives you have in that melting pot, the better the outcome is going to be like if you target very specific people all within with the same culture and the same languages and the same things, you close a lot of doors, and when you close those doors, you go into this predetermined route of somewhere that has an end at some point, in my opinion.

Whereas if you do have a lot of international people and you speak a lot of different languages, there’s just a lot of stuff that comes from that, and in Pexip, I think actually, so, of course, in the Oslo office, we do have a lot of Norwegian people, in the UK office we have a lot of UK people, but actually, within the engineering team itself, I actually think that the UK and Norwegian are sort of among the minorities of the countries or of cultures that we have, and that just makes it super exciting, I mean even just on a free time level, getting to talk to people from all over the world, for me, that’s super exciting, and just like kind of trying national dishes in Hungary or Russia or Serbia or wherever, like all this kind of stuff. For me, that’s just super cool, and it creates like this natural curiosity towards your colleagues and again, we go back to people who are curious and passionate, and if you add some natural curiosity towards your colleagues in that and kind of getting to know them and getting to know like because they’re so different from you getting to know where they come from, what their perspective on life is. I think it just creates a unique value in the company that can’t be quantified in any way. I don’t see why you wouldn’t be if you had the choice if you had to choose to be international, I don’t see why you wouldn’t be and I don’t see why you’d limit yourself to something, and I like you said, I understand consultancies that work with state contracts and this kind of stuff, they have certain obligations and that makes complete sense, but there are companies that choose to be national companies for no reason or require the national language within an office in a certain country, for example, let’s say if we require a Norwegian in the Oslo office, that does happen, and I just don’t I don’t see the point. I don’t see what they’re possibly getting from that, but I do see what they’re losing out on.